The internet tries to devour her, that’s what.  But she’s not slinking away, and I hope she keeps it up!

This is almost old news by now, but it still succeeds in cracking me up.  What’s pissing me off is the way people are reacting – I almost can’t believe how vicious people are being towards this woman.  I’ll make this short and sweet (maybe).

Really pretty woman (Melissa Stetten) is traveling on an airplane.

Her seatmate is a handsome (I guess?) D-list actor named Brian Presley. 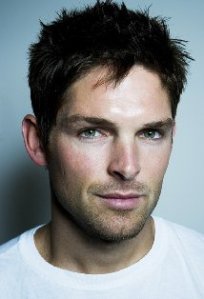 (I can’t believe he was on General Hospital because I’ve watched that show religiously since the Luke and Laura days, and I don’t recognize either him or his character’s name at all.  Umm…leaving no impression is worse than leaving a bad impression.)

Anyway, during the flight, it seems Brain talks about himself a lot.  And a lot of what he says is bullshit and shameless self-promotion.  SHOCKING!  Because no man hitting on a beautiful woman does that!

He’d also had a few beers and seemed sorta intoxicated, like maybe he also had a few at the airport before boarding the plane.  Melissa finds the experience amusing (and obviously annoying because all women love to have jerks like this sitting next to us on planes), so she tweets about it.  She happens to have a sense of humor and has the ability to articulate her thoughts…and she can spell and use grammar properly!

She therefore has a huge advantage, because this means people will read and comprehend her tweets.

And this is just what Twitter is for anyway, right?  People tweeting about their lives…why yes, yes it is, as a matter of fact.

The tweets get attention…enough attention that someone writes a blog post about said twitter stream and is kinda nasty about her…Melissa posts that on her own blog.  Because it’s funny.  And because she has a sense of humor.

The shit hits the fan….  Because Brian is a married, recovering-alcoholic-turned-god-fearing-whatever-and-all-that, and he was not supposed to be doing any of this, and it reveals him to be a massive liar and hypocrite.

Why?  Because the internets decided Melissa is a very bad person because she live-tweeted the experience and now everyone knows that Brian is an utter douche!  It’s all Melissa’s fault!  She’s ruined Brian’s life!  Brian had nothing to do with his own circumstances, because Melissa is really pretty and all the men leaving vicious comments on her blog post and all the other blogs about this, are behaving the way juvenile boys behave in situations like this.  “F*cking b*tch will never f*ck ME, so I’m gonna call her every name I can think of, and blame everything on HER!”

(Meanwhile, they…just…can’t…stop…masturbating…to…her…pictures….  And that makes them really mad.)

(Edit:  I just realized the screencap I’d had up was something of an edited version…this is the original version I saw on Tumblr shortly after the incident occurred and is, as far as I know, unedited…and that much better.)