I’m cringing because tonight I’m breaking my ban on Jay Leno and watching his show, because Mel Gibson is scheduled to be a guest.

HOW CAN ANYONE WITH A TV MISS THAT??

Something about this latest rage-rant of his has been bumming me out.  (Do people still say that?  I do, so whatever…call me old – I am.)  Obviously the other scandalous rants were kinda horrifying, but I mean the bum-out has now gone to another level.  For decades I was a huge Mel fan – yes, my fellow female Mel-fan (okay, we were slightly obsessed) co-worker and I referred to him by his first name – for much of that time I had a ginormous crush on him.  I know, I know, what straight woman didn’t?  But I was breathless, watching his older movies.  I mean the ones from the 80’s, where he was unspeakably beautiful, and when the camera was on his face it was physically and psychologically impossible to look away (so sometimes I had little idea of whatever else was going on in the movies…good excuse to watch them again).

But what set him apart and what made him much more than just a pretty face was the vulnerability that his characters had… particularly those in his 80’s movies…that’s what made him so compelling for me.

(Confession:  I’ve always been a sucker for a pretty face when there is a lot of complicated stuff going on behind it.  How can I spot it when it’s hidden behind the veil of a face?  I have no idea, but it’s an instinct…I even spot it in cats and dogs who have underlying illnesses that aren’t diagnosed until much later.  Go figure.)

I only saw a handful of his movies on the big screen at a theater, though.  I was always too poor to afford the movies when I was younger, and most of his early movies wouldn’t have been at the theaters in the small-ish town I lived in at the time.  I’m talking about Gallipoli, Tim, The Year of Living Dangerously, Mrs. Soffel, The River, and of course the first two Mad Max Movies.  I liked the first two more than Thunderdome, which went all Hollywood, and while it was good, the grit that made the first two movies so great, was gone.  (Although, I still go around my house calling water, “wawtehr” because of the way the kids chanted “Wawkehr” (they thought he was their savior, Walker).) 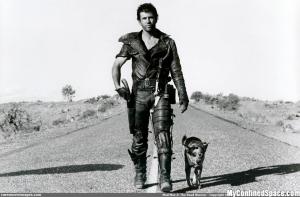 The Road Warrior was in my top 5 all-time favorite movies from the early- or mid-80’s, up until the time Mel’s anti-semitic, racist rants became known.  I’ve seen the movie dozens of times…back in the day, my husband and I would go out to our favorite bar on the weekends and go home and watch either Pink Floyd’s The Wall, The Song Remains the Same, or The Road Warrior.  (Hubby was much less of a fan of RW because he was a pacifist, whereas I…am so not.)  I had matted, framed photos of the Road Warrior hanging in my house for over 10 years.

Around the time Thunderdome came out, Mel did an interview – I think it was in Rolling Stone – in which he was surprisingly candid.  This was of course in the mid-80’s, long before actors or any celebrity for that matter, opened up about difficulties in their lives.  I was really struck by the interview because he was in a very dark frame of mind and talked about exhaustion from doing so many movies in a row, that he was getting ready to take a break and go home to his ranch in Australia and ride motorcycles.

He talked about being destructive – not just a little, but significantly destructive.  He said he’d had problems with drinking – it was bad, and he talked about having some rage issues, and it came down to him having to get his shit together or he’d lose his wife.

I’m pretty sure it’s either the 2nd or 3rd article here to the left.  I was going to quote the areas I’m talking about here, but I’m too cheap to pay the $20 for a subscription, but if you have one, you can access these.

Anyway, I thought about his sort of confessions at a lot, mostly because they came as such a surprise at the time – and the media was nothing like it is now, so no one picked up and ran with that “dirt”.  He was a shooting star, very quickly becoming The Star, and in those days I guess the media didn’t want to alienate celebrities, because of course there was no internet, no 24-hour news cycles, and all of the trappings that come with those things.

I don’t like scandals…I’m not into watching and reading about what celebrities are doing or not doing, and especially don’t like seeing the negative stuff about their personal lives, because I can’t understand why in the hell that’s any of my business.  So yeah, I’m kind of out touch in that sense.  But something about this latest rant unnerves me, and I kind of have the feeling he’s not long for this world.  I know what anger does to my body these days, and the level of rage he’s been displaying has got to be destroying his body.  The repercussions have got to be really damaging for him, psychologically.  The man was on such a high pedestal – put there by Hollywood and by us, the public – so he’s in the midst of such a long, long fall.  Everything in him may break when he hits the pavement…and that may be soon.

Listen, I know he’s a shithead, but a lot of us are shitheads, just maybe in different ways.  But the guy clearly has psychological problems and a serious drinking problem – I wish he could get help.  And I wonder about his ex-wife and kids, and how they tolerated whatever it was they had to endure.  And how are they dealing with all of this?  Surely they’ve got to be very, very concerned.

Something about this is now tragic…it isn’t just fodder for Mel-hating anymore.